This is a summary of a panel discussion from the MMI 2013 Spring Convention held in NYC on April 22-24.

According to the Standard & Poor’s Indices Versus Active Funds (SPIVA) Scorecard:

The year 2012 marked the return of the double digit gains across all the domestic and global equity benchmark indices. The gains passive indices made did not, however, translate into active management, as most active managers in all categories except large-cap growth and real estate funds underperformed their respective benchmarks in 2012. Performance lagged behind the benchmark indices for 63.25% of large-cap funds, 80.45% of mid-cap funds and 66.5% of small cap funds.

Performance returns over the past five years clearly show that active management has had a tough time, Smith opined.  While many more fixed income managers beat their indices, equity managers tend to do better during rising markets.  Maybe equity managers could take after fixed income and do more sector rotation, he pondered. 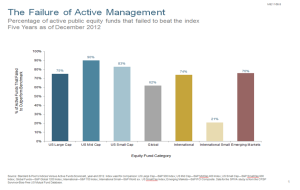 According to Hansen, there is a lot of “closet” benchmarking going on.  These managers are going to have a harder time trying to outperform over time.  Confluence believes that it’s better to do research and locate undervalued stocks for long-term payouts than to try and mirror the index.  They do have an ETF strategy group that exclusively uses passive benchmarks, he noted.

DFA maintains a blend between active and passive management, Foley explained.  Research shows that performance from active management is driven by a mixture of skill and luck.  The question is, how do you separate the skilled managers from the ones who were just lucky?  Also, can you structure portfolios around reliable premiums, he asked?

What are some long-term investment aspects that your firm is focusing on?

Sage offers three broad investment strategies; active fixed income, structured products, and tactical asset allocation using ETFs, Smith reported.  He believes that the hot button strategies going forward will most likely be global tactical active allocation, multi-asset income, and fixed income strategies that take advantage of ETFs on an opportunistic basis.  They avoid buy and hold strategies, which failed in 2008 when the financial crisis effectively changed “core plus into core minus”, he joked.

DFA started in 1981 and have always had close ties with the University of Chicago, Foley explained.  Their philosophy on building portfolios is encompassed in three principles; 1) Markets reflect all information available to buyers and sellers, 2) portfolio structure determines performance and provides significant contribution to how performance is generated; and 3) diversification, he said. 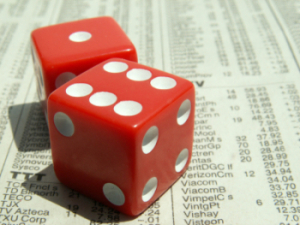 What do you think of tactical allocation using ETFs versus active strategies?

In order to be successful, smaller managers should focus on what they’re good at, Smith advised.  Sage emphasizes their top-down, macroeconomic strategy, which their equity team uses to pick sectors that should outperform the rest of the market.

All the attribution studies show that stock selection is a losing game over the long term, Smith commented.  This makes sector rotation a much friendlier place for a smaller manager to be, he noted.

Has the proliferation of investment product choices helped or hurt investors?

The proliferation of fixed income ETF products has been a boon for investors, Hansen proposed.   They have made it easier for managers to implement certain strategies, such as those targeting duration and credit profile.  ETFs have also enabled adding commodities, which allows managers to increase returns and income for given level of risk, he stated.

Smith pointed out that there could also be a down side to product proliferation.  The increase in flexibility available to managers has amplified diversification, but too much liquidity could exacerbate the herd mentality.  As more and more asset classes become easier to get into, the probability of overload goes up.  He mentioned corporate and high yield bonds as two examples and predicted problems when everyone tries to dump these investments when interest rates eventually go back up.

Counter to Smith’s argument, Hansen described the proliferation of index funds and ETFs as an opportunity for active managers to go against the crowd.  They could be successful by taking a contrarian approach and trying to find undervalued companies that weren’t included in the indices.  But finding them is not about luck, it takes hard work and a dedicated research team, he warned.  (Related article: The Wizards of ETFs – Behind the Curtain)

Have the recent surge in self-directed options reduced the need for advice?

According to Smith, there’s going to be a huge need for guidance as Baby Boomers retire.  They’re more risk-averse than younger investors, especially after they experienced three black swan events in the space of a decade.  Boomers have come to realize the utility of money and now want principle preservation and stable returns, he stated.

DFA are big believers in strategic asset allocation and think very long-term (30+ years), but they avoid trying to make predictions, Foley explained.  “You cannot know what’s not knowable,” he stated, which is why they concentrate on the factors they can understand in the market.

They try to build portfolios that reduce unsystematic risk as much as possible, while staying consistent with their empirical research, Foley noted.  (Related article: Asset Allocation: Is Modern Portfolio Theory Dead?)

Do you believe that alternative investments can be good for your portfolio?

The use of commodities as an inflation hedge has been romanticized and isn’t as effective as people believe, Foley claimed.  Gold has a 20% standard deviation when compared to the Consumer Price Index (CPI), which makes it a poor hedge since the CPI has a very linear return.  The best inflation hedge is a well-diversified portfolio with a long time frame, he stressed.

Alternative investments such as commodities, real estate and infrastructure all generate non-correlated returns, Smith acknowledged.  However, private equity and hedge funds don’t have a very good track record of diversifying risk.  Their lockups and opacity work against clients.  Also, they act more like return amplifiers, which is not how they are being used in many portfolios, he noted.

Hansen agreed that buying PE and hedge funds is paying more for less liquidity and transparency.  A better option would be REITs, which are nothing more than publicly-traded, real estate portfolios, that correlate with small cap value, he pointed out.

How do you interact with Rep as PM (RPM) programs?

There is concern in the manager community that some RPM advisors are just mining information from them, Hansen cautioned.  These are the ones that open just a single account in order to receive the model updates.  Manager’s margins have already been squeezed in the current low-growth environment and this kind of behavior by advisors doesn’t help, he complained.

Smith agreed that there are “outlaws and bandits” on some platforms who treat managers more like shopping assistants than investment partners.  These “hit and runs” happen a lot in the muni markets where the half-life of an intermediate muni bond portfolio can be around 90 days, he said.

The increase in popularity of model programs has begun to commoditize manager offerings, Smith suggested.  This has made life a lot tougher for managers, especially since the new platforms aren’t as sticky as the old SMA platforms, he observed.

On sponsor side, if the advisor has that much flexibility, but doesn’t have enough market experience, they tend to “dabble”, Foley stated.  When the market goes against them, it disrupts their business model, which causes stress on both the advisor and client, he noted.  (Related article: Has Rep as PM Growth Peaked?)

One thought on “Active Management: Skill versus Luck”